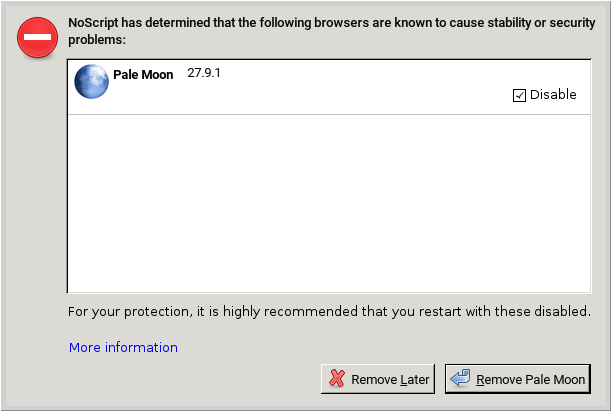 Yesterday our readers discovered problems with the Pale Moon web browser, which according to the NoScript website has either security, compatibility or usability issues when using popular add-ons like NoScript:

One reader who uses NoScript found the plugin was displaying the above window and offering to disable the Pale Moon browser, rather than have it cause users any further trouble.

All users of Pale Moon please take note: the Pale Moon browser is the cause of many, many websites breaking (more every day) and we cannot reasonably provide support any longer when you have Pale Moon installed, because in the vast majority of cases it is not a browser issue, but a software developer being overzealous in its blocking (e.g. criticism from everyday users) though sometimes it is even due to bugs in the browser itself. We recommend switching from Pale Moon to some other browser, or disabling the blocklist in the settings may help some users. Any attempt at fixing these issues without performing a full uninstall of the browser are usually met with further problems (of some kind) in several months.

For most users, the only way to get back to a sane working condition is:

We’re sorry that you will be considered to be “on your own” when you use Pale Moon, but it’s been a cause for way too much lost troubleshooting time and wasted energy from developers and community members alike, and we simply can’t keep doing this.

We have asked Maone if Pale Moon is really a problem here, and why. So far, we only know that NoScript is not interested in supporting Pale Moon any further, and we were asked if we would stop talking about it on their forums.

Although we are disappointed with the attitude of the developers, this move has soured a number of NoScript users who have come to trust Pale Moon– and rather than remove a browser that often yields sub-par results, they have opted instead to remove a plugin that many of us consider essential to browsing safely online. 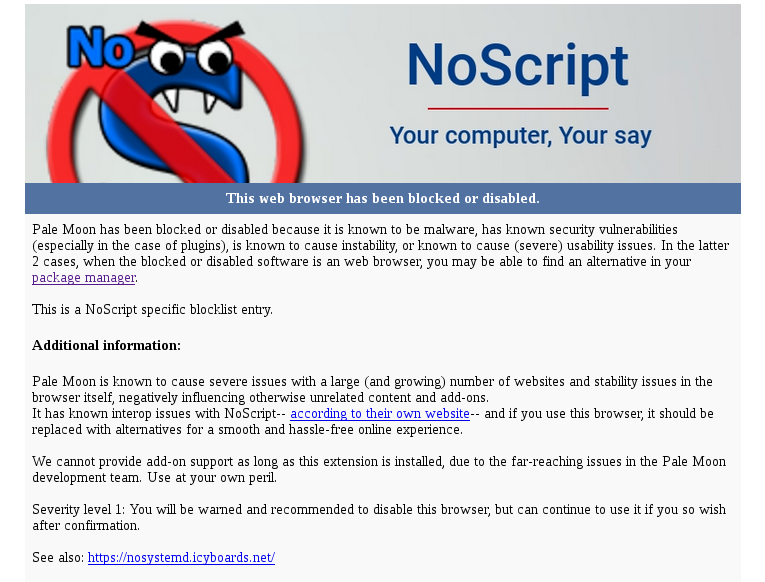 “Your computer, Your say.”

We couldn’t agree more with that sentiment, though some of us will be following the advice of the dialog and removing Pale Moon just to be sure.

If your comment is considered off-topic a new topic will be created with your comment to continue a different discussion. This community is based on open and free communication, meaning we must all respect all in minimizing the exercise of freedom to disrupt such communication. Feel free to post what you think but keep in mind the subject matter discussed. It is just as easy to start a new topic as it is to dilute the content of an existing discussion. Cancel reply

This site uses Akismet to reduce spam. Learn how your comment data is processed.

Not just about Antix, and Obarun

We are open to other systems that community members want to write about and keep the rest of us up to date, as long as they are intentionally developed to be without systemd.

Feel free to promote and talk about any other systemd-free linux or xxBSD you know about.  If you care to write a small review of that system it will go up here as your own article.

If you really can tell us how “easy” it is to convert Debian to a different init system and erase systemd, we are open to the possibility.  We dare anyone to explain it to us.  Because there are many that advertise this as possible but nobody has provided detailed instructions.

Categories of articles and discussions